Busiest Library in the U.S. Retires Legacy SAN and Capitalizes on Hyper-Convergence

Busiest Library in the U.S. Retires Legacy SAN and Capitalizes on Hyper-Convergence 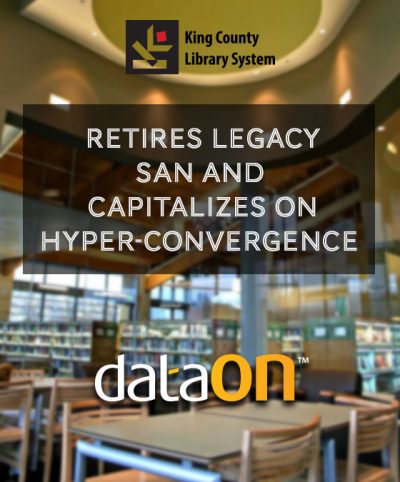 With over 1,300 staff in 48 locations across Washington State, King County Library System (KCLS) is the busiest library in the United States – circulating 22.4 million items in 2010.

But like the old saying goes, “You can’t judge a book by its cover.”  While KCLS continues to do an amazing job at inspiring and connecting the communities of King County, their IT infrastructure was a mess.  With rampant server sprawl and a near end-of-life SAN, they decided to consolidate everything into a hyper-converged solution with Storage Spaces Direct (S2D) and Windows Server 2016.

KCLS chose a DataON 5-node all-NVMe S2D solution to hyper-converge their data center.  In doing so, they managed to reduce their hardware footprint by 10-15 servers while achieving over 2.1 million I/O per second (IOPS) across their 5-node S2D cluster.

“Our new DataON and Storage Spaces Direct solution is a lot faster and more responsive,” said Crew from KCLS, “and with MUST, I can easily find those bottlenecks from a single pane of glass.”