Moving on From Something Familiar, Making the Change to Windows Server 2016

Moving on From Something Familiar, Making the Change to Windows Server 2016

Matt Roper is the Facilitator of Technology Support Services in the Office of Technology & Information Services for the Cherokee County School District, one of the largest K-12 public school systems in Georgia. Matt has over 12 years of experience in managing desktop, datacenter, and network infrastructures. 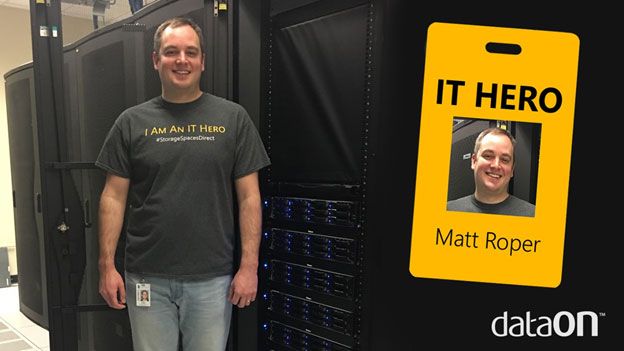 Sometimes it can be difficult to move on from a product that has always been reliable. After I realized that Hyper-V was as good or better than VMware, it didn’t make sense to continue using VMware just because it was familiar. We were already paying for Windows Server 2016 Datacenter Edition, so it was an opportunity to save on VMware support costs. As the 8th largest school district in Georgia, we needed a solution that could keep up with the demands of our 42,000 students and 6,000 staff. From an IT perspective, we needed to simplify things and replace our existing fragmented virtualization solution. Our storage platform consisted of a SAN and local storage. For compute, we had a mix of anything from Dell PowerEdge 2950s to R730s. This solution didn’t come close to meeting our performance needs, so it was time for us to look at other options.

At the end of one of the presentations, I saw a partner demo that featured DataON, and I made a mental note to remember them. I didn’t think a whole lot about them until we decided it was time to replace our Dell EqualLogic SAN, and I started doing research on potential hyper-converged infrastructure vendors.

After hearing proposals from several vendors, we decided it made sense to go with DataON:

Some of the challenges we faced during implementation were related to networking. Specifically, integrating with our existing Alcatel-Lucent Enterprise (ALE) infrastructure. Both of our Mellanox SN2100 switches are uplinked at 40Gbps to our ALE OmniSwitch 10K Chassis. While 40Gbps would have been good enough to get us started, we wanted to maximize performance. Our goal was to create an 80Gbps link-aggregation (port channel for those that are familiar with Cisco) to our core. To do this, we had to create a dynamic link-aggregation on our 10K (via LACP 802.3AD). On the Mellanox side, we configured MLAG. As a side note, it’s important to ensure that spanning tree is enabled.

Another issue we had to address was migrating our existing VMWare VMs to Hyper-V. We tested 5nine V2V Easy Converter and bare metal recovery through Microsoft’s Data Protection Manager (DPM) 2016.  Both options are sufficient, and most of our migration was completed using DPM.

My experience moving from VMware to Windows Server 2016 has been a good one. The entire deployment was much faster than our previous VMware deployment.  The money we saved on VMware licensing fees is being reallocated to other projects!

If you’re considering a move to a Windows Server 2016 software-defined infrastructure and have questions, contact the experts at DataON!

HGST is a wholly owned and independently operated subsidiary of Western Digital Corporation, marketing and selling its leading storage portfolio around the world. HGST strategically invests in high-growth and emerging technology segments, with expanding research and innovative product development.